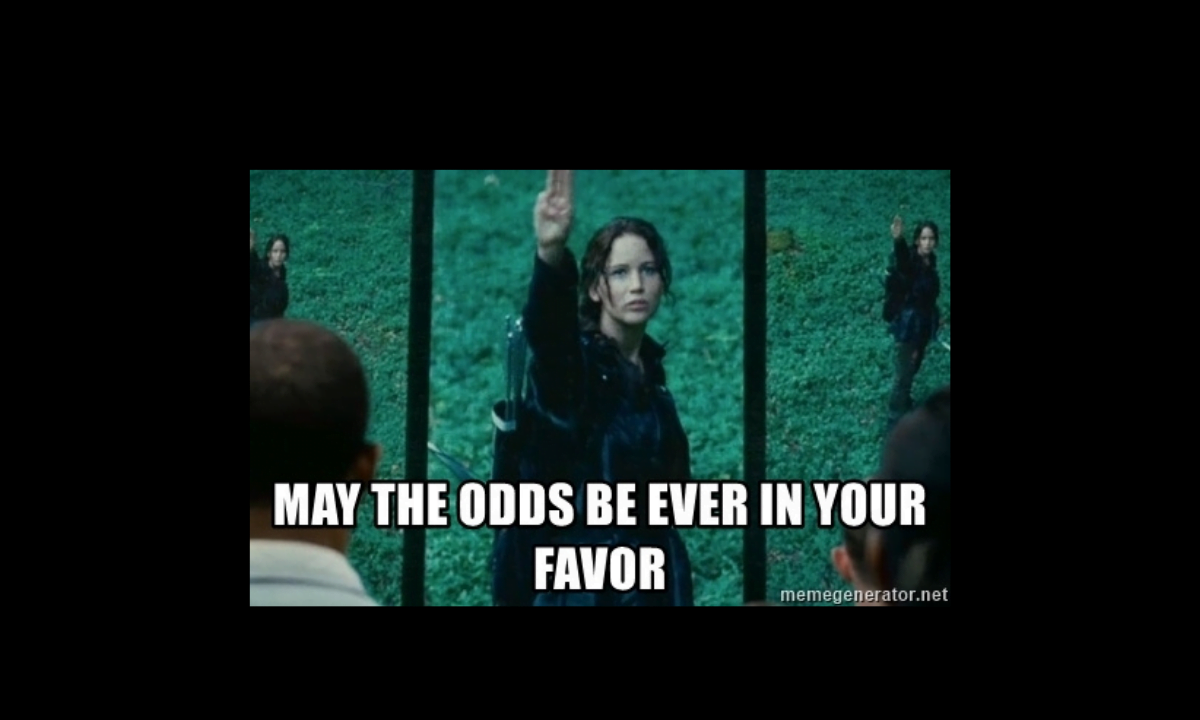 May the odds be ever in your favor means “I wish/hope that you have the best chances of winning, not just now, but always.

The phrase actually comes from a group of books and series called “The Hunger Games” and was originally used to wish good luck in simple terms to the participants and the bettors betting on them.

To understand it properly, let’s divide the sentence into individual words.

May– Here, it is to express the desire or wish.

The Odds– Here it means what are the chances of occurrence of an event. For ex- In Infinity War Doctor Strange looked at 14,000,605 possible outcomes for the future and the odds of winning were only 1.

Favor–  means to your advantage. Its Favor in American and Favour in British English.

Origin Of May the Odds Be Ever in Your Favor

The Catchphrase first emerged in 2008 in a novel called “The Hunger Games“.

After it also popped up in a movie inspired by the novel around 2012.

A scene of the movie was uploaded to youtube portraying Elisabeth Banks as Effie Trinket using the phrase “may the odds be ever in your favor”. It got reshared by smilecloseup on August 31th, 2012.

How Did May the Odds Be Ever in Your Favor Catchphrase Spread?

It seems an internet subculture has been created by the fans of the series. The phrase is often used to convey good luck as a more dramatic alternative.

Reddit and Tumblr are a few other platforms where the phrase is published as memes. The images and discussion surrounding the phase are present till the present date.

Post Views: 47,916 I assume you are one of those who came across these trending sigma rules memes on social media and wondering what...

Post Views: 20,225 Introduction If you are wondering how does Google search works then you are one of those nerds who likes to dig...

Post Views: 6,789 Can We Pretend That Airplanes In The Night Sky Meme? – The original source is a poorly drawn comic of Mordecai...

Post Views: 6,761 Introduction Hyperloop technologies were never a new concept as some of us might think the case is but it is derived...

Post Views: 4,408 Deepfakes: So recently I came across many funny videos on social media where people were putting some of their friend’s or...

Post Views: 1,701 What’s going on my individuals. It is already the end of the year. It was a pretty rough ride for many.....